A positive, inclusive environment leads to increased productivity. But many workplaces can be hazardous for employees who don’t conform to society’s gender expectations. If you’re reading this article, you want to change that. Keep reading to learn how to create a workplace that is inclusive for transgender, nonbinary, and gender-nonconforming employees. 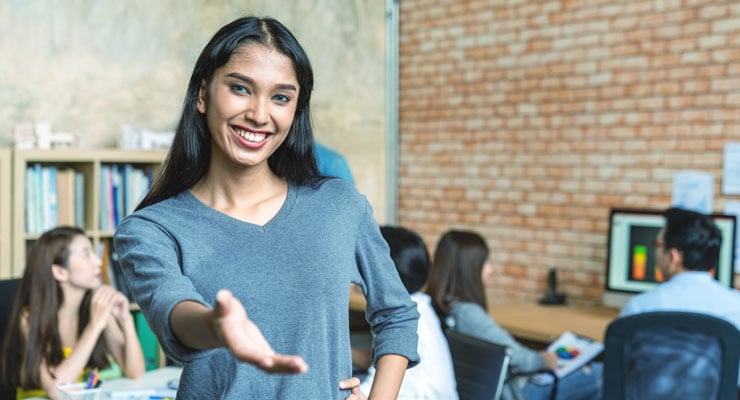 Wait! What Do the Words “Transgender,” “Nonbinary,” and “Gender Nonconforming” Mean?

Take a look at some of the terms we’ll be using in this article:

Here are a few things to keep in mind:

What Challenges Do Gender-Diverse Employees Face in the Workplace?

“You really wouldn't believe the level of discrimination that people levy on gender diverse people,” explains Schofield. “When we peel off or rearrange the (gender) label that was put on us at birth, it catches a lot of attention from people, and a lot of the negative attention is just really astounding.”

Schofield points out that being gender diverse means “staying true to a sense of authenticity,” an ideal our society ostensibly values. “But because we look different, because we don't conform, that comes with a punishment.”

That punishment can be serious, especially for transgender people of color. According to the National Center for Transgender Equality, the majority (more than three-fourths) of transgender people have suffered workplace discrimination, from being denied a job to suffering “physical and sexual violence.”

How to Create a More Inclusive Workplace

If you are a leader in your organization, you can take these steps toward creating an inclusive environment for transgender and nonbinary employees. (If you don’t have the ability to make organizational change yourself, bring it up with your supervisor.)

Start with your company’s introduction to employees: The application form. Don’t limit potential employees to a male/female box. Instead, include a write-in option for their gender, Schofield suggests. If the form is electronic, you can allow them the option to privately tag that they are trans.

Inclusion should be “in the architecture,” explains Schofield. That means there are “options within close walking distance for everybody to use a bathroom … without feeling any kind of lack of privacy or discomfort.” Signs that say “inclusive bathroom” or “all-gender bathroom” tell employees that restroom facilities are safe to use.  “When I'll walk into a building and that's what I see, that's a good sign,” Schofield adds.

Why is this issue so important? Trans people face “violence or harm” in gender-segregated restrooms, says Rubin.

Look at the numbers in this survey cited in The Washington Post. Of 93 transgender/gender nonconforming adults, “68 percent had been verbally harassed and 9 percent had experienced physical assault or violence in a gender-segregated restroom, and 54 percent of the sample had experienced some sort of health problem (such as a urinary tract or kidney infection) as a result of trying to avoid a public gender-segregated restroom.”

That means an all-gender restroom facility doesn’t just make your employees feel safer. It is key to their health and well-being.

Use the Correct Name

Make sure you use an employee’s correct name — the name they chose for themselves, rather than the “dead name” they were assigned at birth. If an employee transitions while they work at your organization, update their name wherever it appears. (Think nametags, business cards, door plaques, work schedules, email addresses, etc.) Create a plan so the name changes can “go live on the transition day,” suggests the Transgender Law Center.

Use the Correct Pronouns

Here are some common pronouns that people use:

When you use the incorrect pronoun, it’s called “misgendering.”

“Misgendering is a problem that trans and nonbinary and gender-nonconforming folks face regularly,” says Rubin. “It's not just about language, it's about recognition of a human being’s personhood, and their right to bodily integrity and sovereignty, and the right to identify as they wish.”

Don’t assume you know what pronouns someone uses, Rubin cautions, because “people can have really diverse identities despite their appearance.” You can share your own pronouns when you introduce yourself and politely ask someone else what pronouns they use (although you should be sure you do this in a way that doesn’t make them feel singled out).

Give employees the option to include their pronouns on their email signature. If you are not a member of the trans community, sharing your pronouns is one way to show that you are an ally. Schofield explains that the message you’re sending is: “I may be able to get through the world, you know, as a person who has a gender that everybody recognizes, but I recognize that not everybody does. And so I’m going to take the opportunity to … announce myself in this way so that you don’t feel like you’re the only one who has to.”

To encourage employees to add their pronouns to their signatures, you can send a sample email like the one highlighted in this Forbes article. (Just ensure that you don’t make this mandatory, in case some employees are not ready to come out yet.)

Health benefits should include gender affirmative care and cover everything from “therapy to medical interventions like hormones and surgery,” Schofield says. This should not cost extra for employees, because these are “lifesaving medical interventions for trans people and for people's trans children.”

Worried about the cost? Don’t be. “Transgender-inclusive health insurance benefits are not expensive, particularly for large employers,” according to an article by the Human Rights Campaign.

People often feel they have the right to ask invasive questions about a trans person’s body. This is, obviously, not the environment you want to cultivate at your workplace. Nobody should have to come to the office anticipating a conversation about their genitals.

Even well-meaning comments about an employee’s appearance can be hazardous territory. Let’s look at two scenarios to avoid:

Scenario One: You want to compliment your co-worker, who has recently transitioned. Pause before you speak. Schofield cautions against saying things like “You look really pretty today.”

“You might think that’s a really nice thing to say to someone who is wearing a dress for the first time at work,” Schofield says. But commenting on appearance can lead to HR pitfalls — and it may not be what your colleague wants to hear.

“There’s this erroneous perception out there that people who transition are seeking attention, and it couldn’t be more incorrect, because actually nobody wants the attention that comes with transition,” Schofield says. “For those of us who are moving through life feeling extra, extra visible in ways that most of us really don’t want, having it not be an issue and just being treated as a professional who has something to contribute to the workplace is the highest compliment you can pay somebody.”

The bottom line is this: “Making us not special is something really special.”

Scenario Two: If your colleague is transitioning and you’re curious about their medical procedures, keep that curiosity to yourself. “It's important for people who might be well-meaning allies or co-workers to know not all trans people medically transition in the same ways,” says Rubin. “And it’s really quite inappropriate to ask about. You wouldn’t ask anybody about any detailed bodily surgeries or procedures, right, if you didn’t know them well? So that goes for trans and nonbinary folks, too.”

Schofield echoes this sentiment. “Body-centered conversation is highly inappropriate for anybody in any workplace. It is sexual harassment, trans or not.”

Heteronormativity means you assume that everyone in your workplace is cisgender and heterosexual. “In a corporate context, I would say heteronormativity shows up in a lot of casual ways like, ‘Oh, I see you have a ring on. What’s your wife's name?’” says Yelvington. “But it could also be further ingrained in the policies of a workplace.” Gendered dress codes that require women to wear dresses and men to wear suits and ties are an example of heteronormativity. Expectations of gendered behavior is another. For example, workplaces may expect men to behave aggressively and consider them “weak” if they don’t conform to those expectations, while dubbing women “bossy” when they behave with the same level of aggression, says Yelvington.

“For trans people specifically, they might feel like in the workplace, they have to buy into those gendered roles in order to be taken seriously, … which obviously shouldn’t be the case, right? People should be able to express their gender how they want,” says Yelvington. That’s why “tackling sexism in the workplace also means dismantling transphobia in the workplace.” 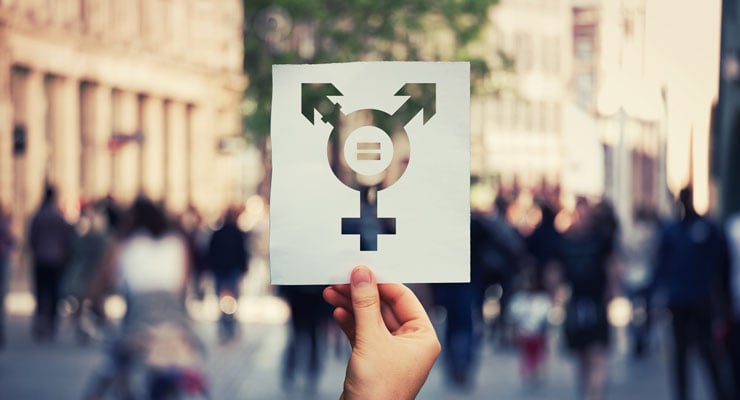 Provide (and Participate) in Training

We’ve listed a few ways you can create a more inclusive workplace. One of the best things you can do, however, is to continue your education on these topics. Host diversity training at your workplace so that you and your employees are informed and equipped.

“Corporations are made up of people, and people bring all sorts of diversity to the workplace,” Schofield says. The more we learn about this diversity, “the more people will feel comfortable being who they are where they work, and thereby doing better work.”

If an employee has recently transitioned, it’s important to remember — and to remind your team — that they are “the same person with the same skills, the same things to offer that they ever had before,” says Schofield.

Still Not Sure What to Do? Just Ask.

“The most important thing that employers can do to support their trans and nonbinary employees is to talk to them and ask them what they want,” says Yelvington. “Everyone is going to need something a little bit different and individualized.”

She suggests you ask:

The more you truly listen to your employees, the better your work environment will become.

At USF, we’re committed to creating an inclusive community through our Office of Multicultural Affairs and our Office of Diversity, Inclusion and Equal Opportunity (DIEO). To find out more about the professional development opportunities offered through USF, contact us through our website, or give us a call at 813-974-0950. 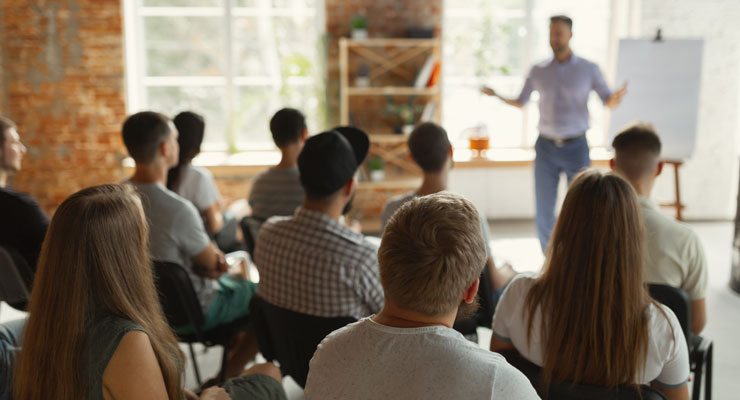 Resolve to Learn, Grow, and Improve 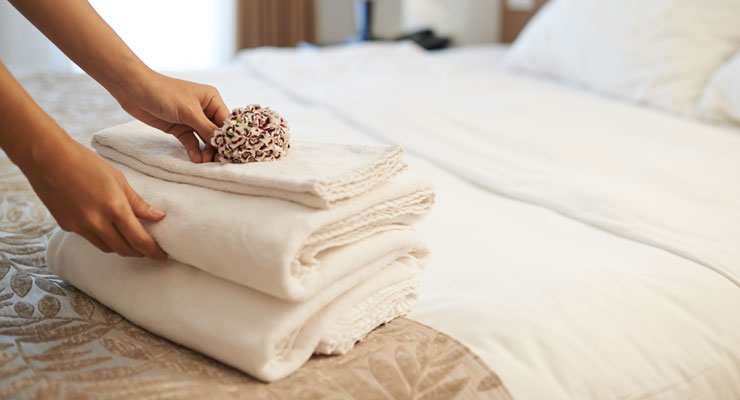 Housekeeping Secrets for a Cleaner Hotel and Repeat Guests